Many well-known approaches to implementing the Proof of Stake consensus such as Tendermint [1], Hotstuff [2] and PBFT [3] are bi-modal: the protocol typically consists of a simple normal path where a leader makes proposals and everyone votes. When the normal path fails, the protocol switches to a much more complicated fall-back mode typically called a “view change”. In the view change phase, participants use the same communication process to reach an agreement on the new view before they can go back to the normal path of producing blocks.

Incognito’s BFT proposes a simpler approach. Instead of reaching an agreement on a single view, participants could see multiple views; the communication process for the view change in existing approaches is now used to propose the new block. Participants may have multiple different views, but when the majority (> ⅔ participants) commits a new block, this means that they have the same agreement on this view. If they continuously produce blocks on this view, i.e. this view dominant and achieves finality.

The number of malicious nodes in the network cannot simultaneously equal or exceed ⅓ of the overall nodes in the system in a given window of vulnerability.

Requirements for the nodes are that they are deterministic and start in the same state. The final result is that all honest nodes come to an agreement on the correct and longest chain.

In a normal case, Incognito’s PBFT is quite similar to other PBFT protocols. A node is selected as a proposer which will propose a block; other committee members vote for the block to be appended to the chain. Proposers are selected in round-robin fashion based on their id in the committee.

If a normal case fails, due to:

Committee members would then see many different views. In order to restore the common view of all nodes, two general rules are applied:

To achieve consensus without agreement on view change, nodes in Incognito’s committee have to use the following Vote rules and Propose rules 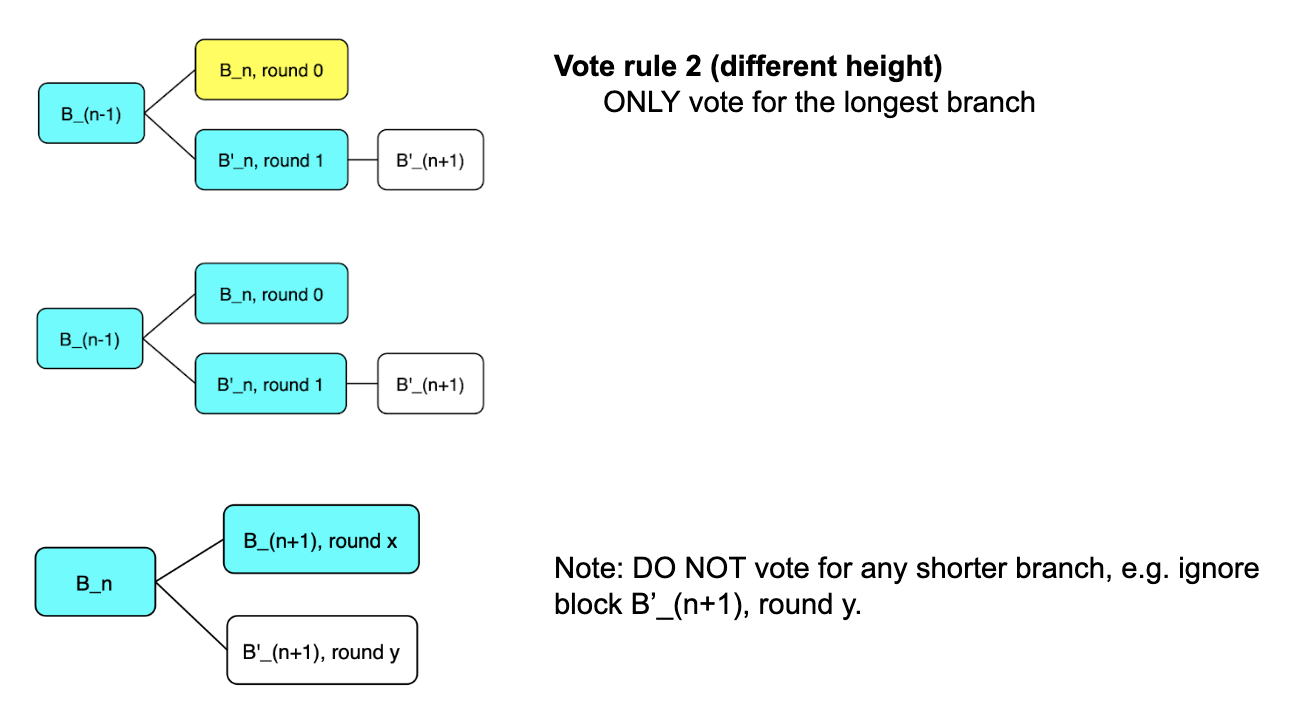 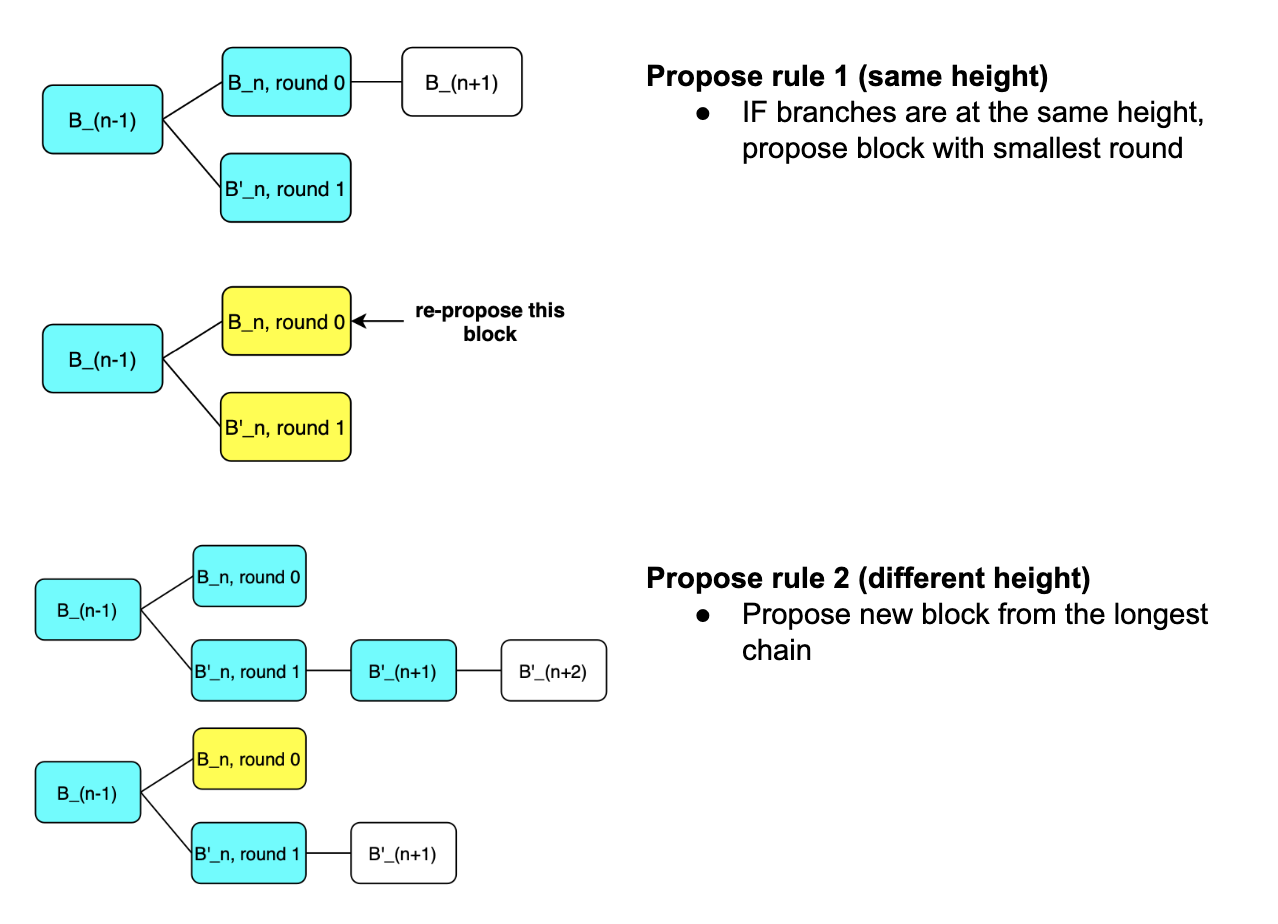 Proof. When block n is committed at time slot t, and block (n+1) is proposed at time slot (t+1), this implies that block (n+1) is proposed for the first time. This also implies that > 2/3 members received, agreed and voted for it. This means any further proposed block with height (n+1) will not get enough votes to commit, following Vote Rule 1. And following Vote Rule 2, no branch can grow any longer than the one with block n.

Finality Theorem IF a block at height h is first proposed and committed in the same time slot, THEN it is finalized.

By proposing rules 1 and 2, the proposed block at height h is always in the longest chain (i).

Therefore, to be committed, any new proposed block must append to this block. No branch can grow any longer than this one. (iii).

Observation 1. If block bn is finality, then further blocks are appended to the branch containing bn, any other branch b’n is made obsolete. If a new block is successfully appended to another branch, say b'n, then more than ⅔ participants don’t agree bn is finality. This is a contradiction.

Proof. bn+1 and b’n+1 are finality, which means that bn and b’n are finality, if bn ≠ b’n, which either violates Observation 1 or the assumption that ⅔ participants are honest. 𑃰

Observation 2. Proposer is selected in round-robin fashion. Any participant will eventually be a proposer. It can then include the transaction in proposed blocks.

Consider the worst case scenario where two chains are growing to infinity. In order for this to happen, the following conditions must be satisfied: 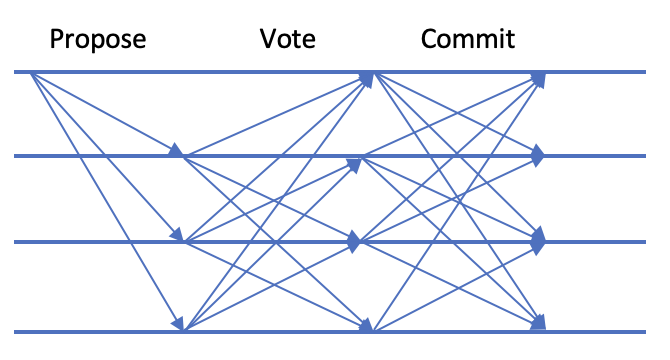 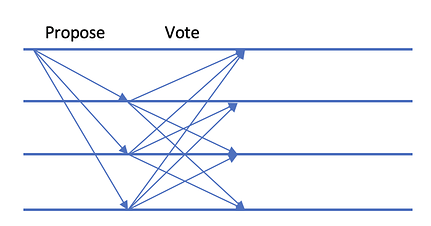 The multiview PBFT approach is simple but has many advantages:

The approach of Multiview PBFT has a natural philosophy. The consensus respects the majority group; the powerful node – which can commit blocks during bursts of network traffic – can advance the chain to new height during heavy network traffic.